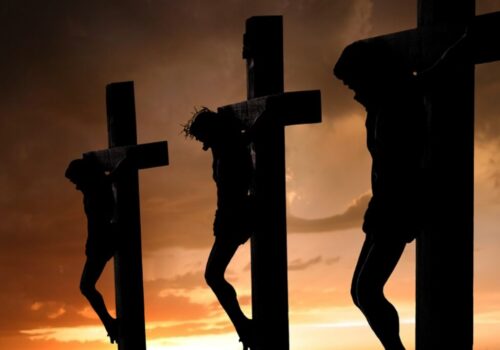 WHAT ABOUT THE THIEF ON THE CROSS?

That is a very interesting question, and one that many people ask when confronted with a challenge to  their understanding of  salvation. Why ask this question anyway?

The first thing to understand is that in the original language (Greek) there is no punctuation marks or spaces between words, and the letters are all capitals. That would be a difficult read even if it was done in English. The translators had to figure out what exactly was being said, or what the intent of the author was.

Luke 23
42 And he (the thief) said unto Jesus, Lord, remember me when thou comest into thy kingdom.
43 And Jesus said unto him, Verily I say unto thee, Today shalt thou be with me in paradise.

Jesus’ response to the thief appears to say that he would be with Jesus in paradise “today”. That can not be correct for more than one reason. First, given that there was no punctuation in the original the comma after “thee” is in the wrong place and should be after “today”. This alters the intent of the statement as we see here:

“I say unto thee today, with me shalt thou be in paradise”

Moving the comma to after “today completely alters the meaning of the statement to say that the thief will be with him in paradise at some time in the future. That is the grammatical error that has been made by the translators. The actual order of the words in Jesus’ statement in Greek is different as well, which also changes the intent of what the author is conveying to us.

Going further into the depth of the scriptures we see that Jesus rose early on the third day. Jesus died before sunset the first day and was buried. He lay in the grave on the second day and had not been raised from the dead. The scriptures tell us that he preached the gospel to those in hell (or the grave) during the second day, so he was obviously not in paradise, so there is the second reason for the thief to have not been able to be with Jesus “today”.  Jesus was raised from the dead early on the third day. The Hebrew understanding of a day was the whole day, or any part of the day, so when the bible says he was in the grave 3 days, it means any part of all of those days, so it was not 72 hours as some might think.

40 days after the death of Jesus he ascended into heaven.

That event was witnessed by his disciples. They were told to go and wait in Jerusalem until they received power from above, which took place on the day of pentecost.

Jesus’ death satisfied the requirements of the law for the shedding of blood as a sacrifice for sin. The thief had died before Jesus was raised from the dead. All three died under the law, Jesus and two thieves. one thief repented and is apparently forgiven, the other did not it seems. The thief did not partake of the outpouring of the Holy Spirit on the day of Pentecost.

Paul wrote to the church in Rome that there is “none righteous, no not one”.

After Jesus’ death no one could be saved by obedience to the law. If the thief was granted salvation by the forgiveness of sin under the law, he would have been the last person in that position, ever!
Everyone now, since the day of pentecost, must obey Peter’s direction in Acts 2:38 to even begin to be saved. The thief on the cross can not possibly be used as an excuse for anyone to think they are saved because of just feeling sorry for their sin and believing they are forgiven. That is impossible now, as the two dispensations can not run together concurrently. Either the Law is in force, or grace is available, not both.